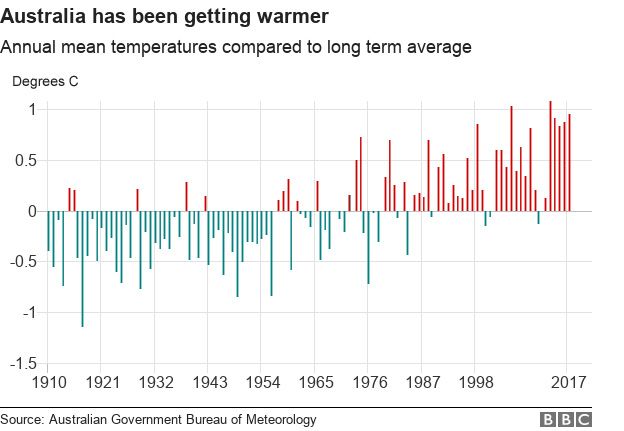 The summertime period of the southern hemisphere, despite the lack of the El Niño phenomenon, has given a long period of high temperatures, dry climate and extended heatwaves. Especially for Australia, the 2017’s average temperature of 22.76C – or 0.95C above the long-term average – was the third-highest year since records began in 1910.

“Another year has passed and we have another set of records driven by intensifying climate change,” Will Steffen, a climate change expert from the Climate Council, said, according to The Guardian (https://goo.gl/5GtTDz). In Sydney, it was recorded the second warmest day in history (47.3 C), and in Victoria region, the temperatures were so high that highways asphalt began to melt due to heat.

Moreover, flora and fauna were severely affected. According to the National Geographic, bats were being boiled alive, with thousands falling from trees unable to adjust to the heatwave’s temperatures. As stated by the Australian Bureau of Meteorology’s Dr Blair Trewin in BBC, the World Heritage-listed Great Barrier Reef, the only living structure visible from space, it is estimated that about half its coral in shallow water was killed over the past two years, a fact that it is linked to increased water temperatures. (https://goo.gl/V9zyE2).