The beAWARE project was a use-case driven project that aimed to cover the functionality required by three relevant operational scenarios.

The realisation of the project followed a spiral process where every iteration was based on the outcomes of the previous step. To summarize the steps followed: we started with the definition of the use cases and requirements (D2.1) and of the evaluation methodology (D2.2). Then, we defined the first pilot set-up and its evaluation methodology (D2.3). The outcomes of the first evaluation cycle set the basis for the definition of the final user requirements (D2.10) and addressed the technical implementation of the 2nd prototype and the second pilot set-up (D2.5). The evaluation of the second pilot played a key role in the implementation of the final system and for the definition of the third pilot set-up (D2.7). In total, three separate pilots took place to test different versions of the system during its development phase. These pilots had different operational scenarios, relevant to the management of extreme weather-related events: Heatwave, Fire, and Flood. The results of these pilots are presented respectively in the deliverables D2.4, D2.6, and D2.8.

Listed below are shown the three beAWARE Prototype Demonstrators, that were applied to each of the pilots. Each Demonstrator corresponds to one of the three Use Cases, Heatwave, Flood, Fire and together compose the overall capabilities of the platform.

We’de love to get your feedback on features, usability, and possible improvements.

The beAWARE 1st Pilot was executed on the 20th of November of 2018 in Thessaloniki, Greece, with the aim to test the 1st prototype along with the heatwave scenario. The two main locations of interest were: HRT Headquarters, where the control room was established and the PSAP located, and one place of relief in Thessaloniki, the 6th KAPI. Additionally, some action was performed in the areas nearby these two main points.

The storyline was divided into three sessions of  20-30 min each:

Pre – Emergency. This session represents the hours before the crisis itself when then heatwave has not already happened, but the weather forecasts highlight a possible critical event in the next 54h (i.e. weather conditions favorable to the heatwave phenomena). During this phase, a crucial role is taken by early warning systems and the goal of beAWARE is to help the Authorities to understand the possible future scenario, send the first alerts to the citizen and start the preventive measures

Places of Relief: this session of the emergency phase regards the management of the relief places during the crisis. In particular, beAWARE will support the real-time monitoring of the level of crowding of the shelters, which will be estimated also through images and videos sent by citizens and first responders.

Traffic Jam and Power Outage. This session, the latest to be performed during the crisis, regards the management of a situation where, due to heatwave, a power outage occurred, causing many problems such as traffic jams. The goal of this phase is to help the decision-makers to understand the current situation, from incident reports send by citizen and first responders, and to improve the coordination with volunteers and authorities. 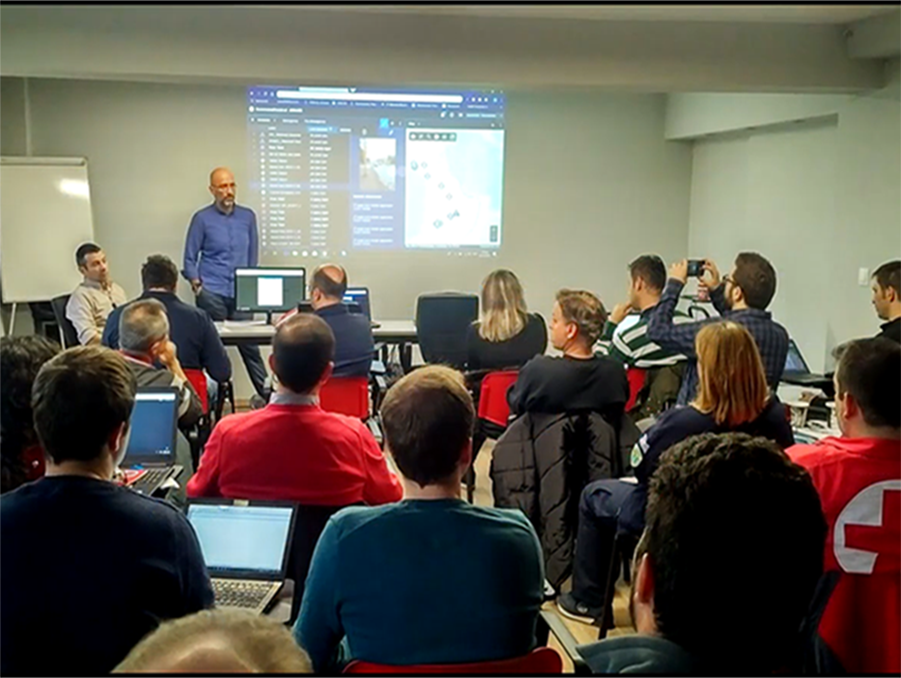 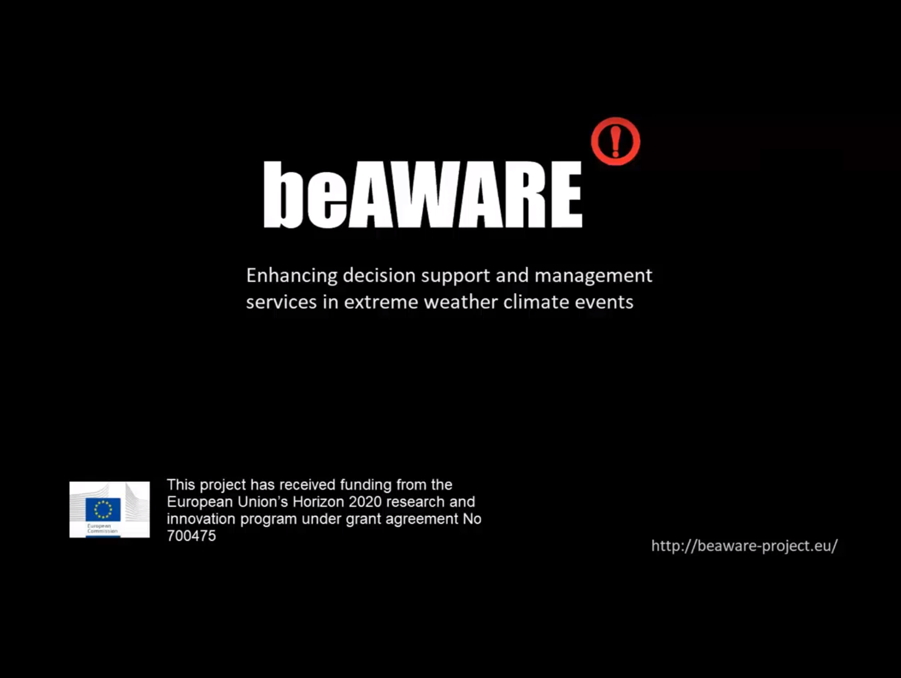 The second beAWARE pilot took place on the 7th of March in Vicenza, Italy from 8:00 CET to 14:00 CET at the presence of more than 90 participants.

The story line for the flood pilot was divided into three sessions that altogether cover all the flood Use Cases. During the pilot, each session was performed twice: the first time the management of the situation relied only on the use of the legacy tools (which are: telephone - stable and mobile lines, VHF, email and press releases); the second time, the same session was executed with the beAWARE platform and the end-user’s tools (PSAP, mobile app and Sensor Thing Server).

The first session was the pre-emergency phase, before the occurrence of the flood, which focuses on the EWS and forecasting models, taking the data from a real past event (the flood of the 1st November 2010), with and adequate time scaling to fit the current date time and the duration of the session. More in detail, the story-line starts when the flood forecast model AMICO produces a forecast indicating a possible flood event in the next days, with predicted water level above all the alert thresholds in the section of the Bacchiglione River near the Bridge ‘Ponte degli Angeli’. Promptly the beAWARE platform informs the Decision Maker about the situation that derives from this forecast.

After this point session 2 started, when the situation was constantly monitored by the Decision Maker from the PSAP, focusing now on the real-time measurements taken by the water level sensors along the Bacchiglione River in Vicenza.

In fact, as forecasted, the flood started and the level in Bacchiglione River at Vicenza was constantly growing higher. As consequence, the observed water level at Ponte degli Angeli river section exceeded gradually all the three alert thresholds.

During the emergency the Decision Maker is also constantly updated by the teams about their location in the city and the status of accomplishment of their tasks,

The third phase started when the Bacchiglione river in Vicenza overtopped the embankments and started to flood the nearby areas; in a real emergency, this situation occurs shortly after the exceeding of the third threshold defined at the Bridge ‘Ponte degli Angeli’. As consequence, Citizens and volunteers sent incident reports to signal to the authorities that there were flooding in various areas of the city centre. While the tasks that the volunteers had to perform are not pre-defined ones, as in the previous phase, they depend strictly on the ongoing situation and on the flood reports provided inside the city.

In this phase, the system collected a large amount of information about the current emergency from different areas of the city, such as: incident reports, video from fixed video cameras and drones, images and videos taken by the mobile app, Tweets etc.

Regardless of the various sources and their format, the incoming data were analysed by the proper tool of beAWARE platform. The outcomes of the analysis were presented in an efficient and meaningful manner to the PSAP and the Dashboard assisting the Decision Maker to consider useful information concerning the incident, such as its location, its level of risk etc. 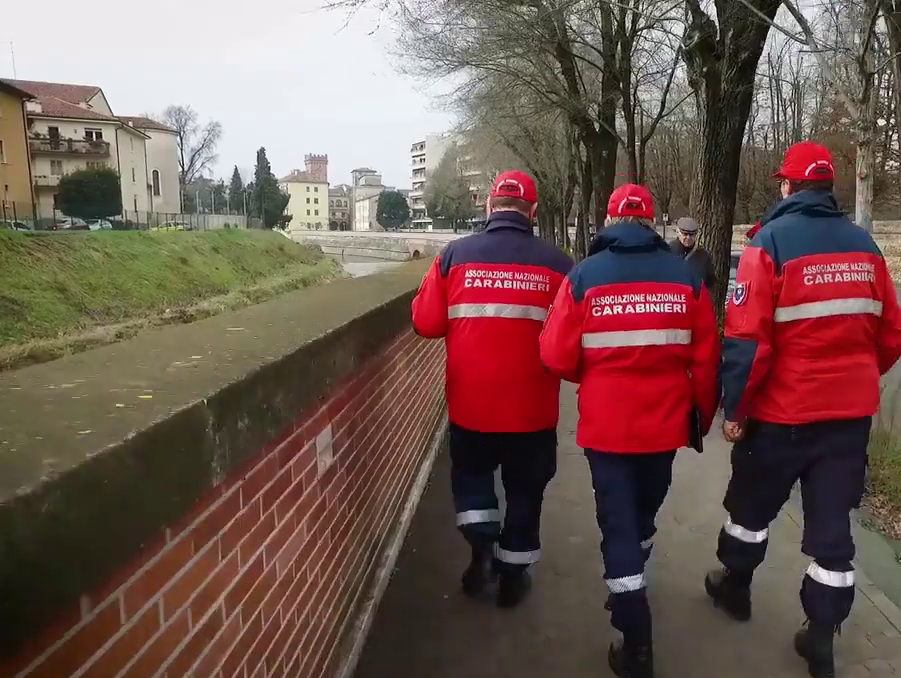 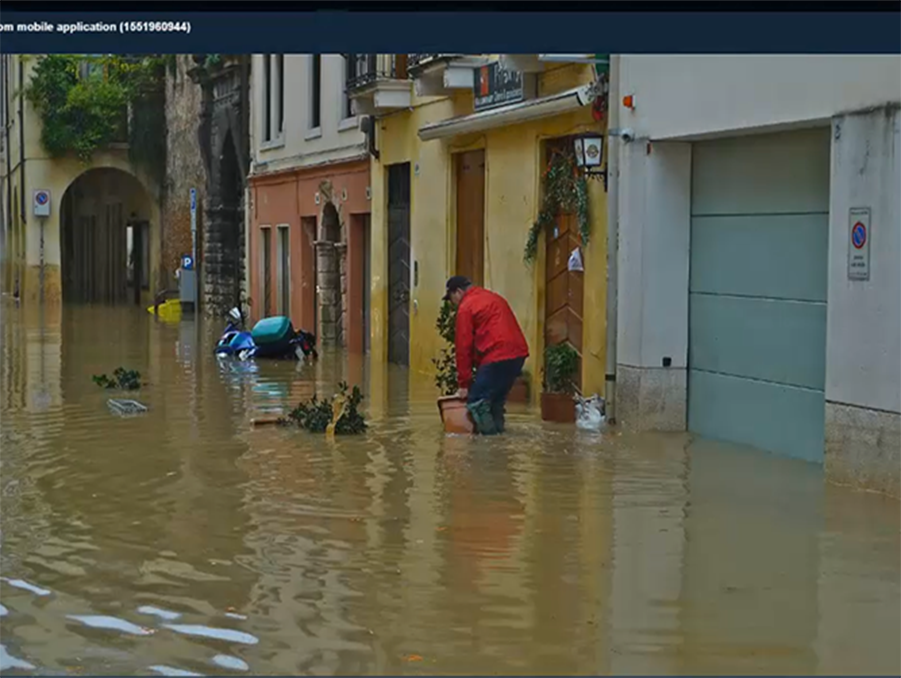 After the pilot, in parallel with the debriefing session, the autonomous drone flight live demonstration took place in the S. Agostino district, located in the southern part of the Municipality of Vicenza, Calongthe River Retrone and about 7km away from the City Centre. Due to the Italian regulation about drones, the areas for the flight test had to be located outside the city centre. For that reason, the joint between the Retrone River and the Cordano Channel was chosen.

The first part of the demonstration consisted of a scan of a pre-defined area. The demonstration started with the drone going up to the designated flight height of 15 meters, and flying to the starting point of the scanning of the area. The route was calculated for the drone to cover the designated area which was 130 meters by 68 meters. The speed of the flight during the scan was configured to 3 meters per second. Images were captured by the drone and sent to the platform every 1 second.

Once the scan of the area was completed, the drone was directed to inspect several pre-defined points of interest: (Pipes of a pump, Pump, Gate). In all the points of interest the drone reached the designated point and lowered its altitude to 10 meters, to send more detailed images. Finally, the drone flew back home and landed at the point of departure 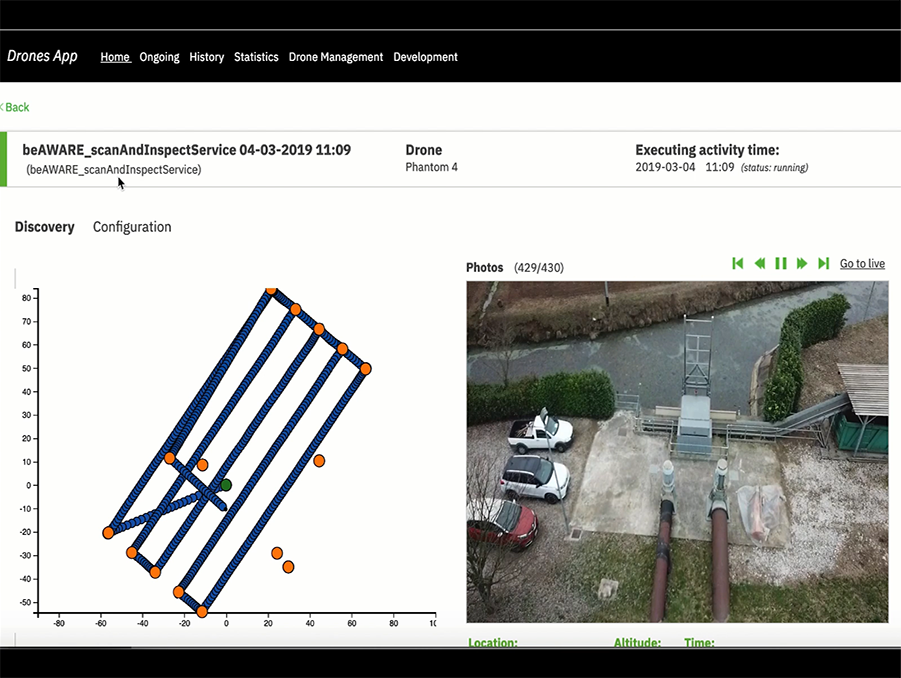 The third beAWARE pilot was executed on the 14th of November in Valencia, Spain, with the aim to test the final version of the beAWARE system applied to the fire scenario.

The fire pilot was organized in a similar way with the 1st (heatwave) and 2nd (flood) pilot, simulating some emergency and pre-emergency situations that are addressed in two separate sessions, one with beAWARE and next with the current available equipment (legacy tools). In addition, the third pilot introduced a new type of session, the “blended”, based on the combination of beAWARE and legacy tools. The blended session added an extra degree of reality to the pilot since, as it was pointed out in a previous report, the system developed inside this project is considered as an addition and not as a replacement of the existing legacy tools.

The pilot involved different areas of the city Valencia and of La Devesa-Albufera Natural Park, which includes the forest of El Saler and two educational centers located nearby to the forest mass. One of these two institutes, The Secondary School, was evacuated in the last phase of the pilot.

After the end of the second evaluation cycle, based on the outputs of the flood pilot and the suggestions of the reviewers about considering beAWARE not as a replacement of the legacy tools, but as a complement of those systems, the Consortium decided to change the structure for the pilot storyline. In fact, while the flood and heatwave pilot focused on the duality beAWARE-legacy system, the third pilot storyline introduced the concept of “blended session”

As a consequence, the storyline for the fire pilot has three stages as follows:

The pilot has been developed taking into account three different scenarios: 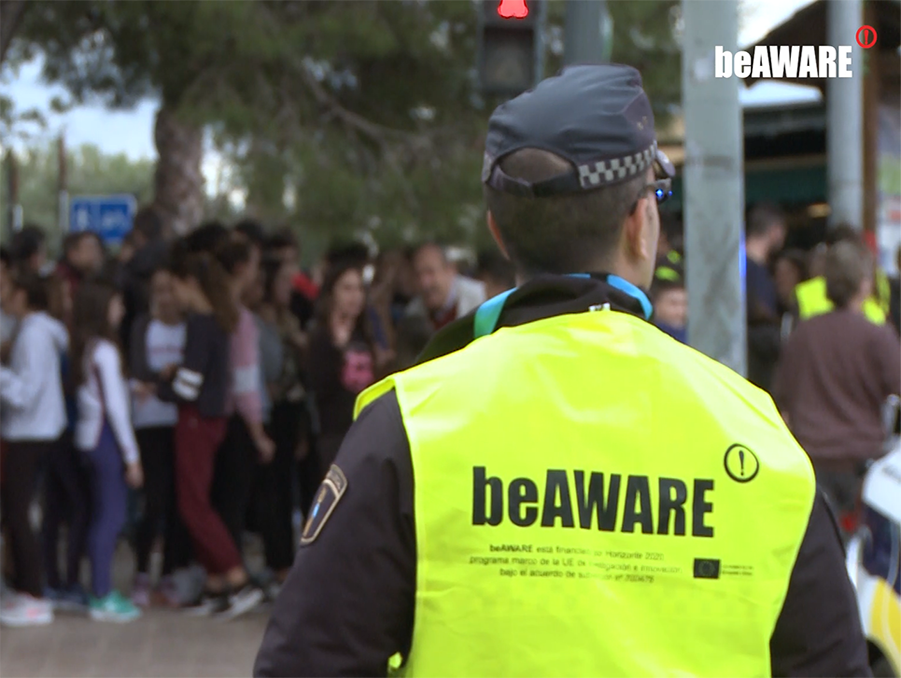 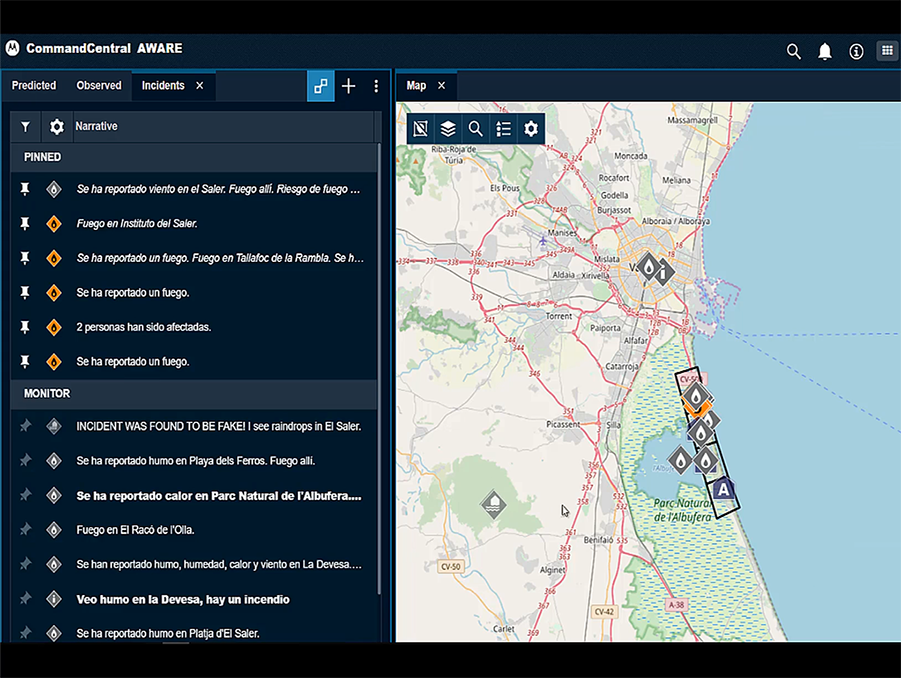